How could I possibly step into another writer’s shoes and take over their blog for a week, especially if I had to assume the tone, voice and opinions of the author?  I suppose some people can imitate another writer and function as a ghost writer but I would fail miserably because I write intuitively, from my soul and almost subconsciously, not from my intellect alone. If I tried to copy another’s writing idiosyncrasies, the result would be stilted, boring drivel without any spark of life in it.
Writing on another blog would be like wearing another person’s clothes without alterations, leaving me feeling like a kid playing dress-up in a famous writer’s clothes or else like an adult writer pretending to be a kid writer. An even better analogy would be taking over a stranger’s home while they were on vacation and touching and using everything as if it were your own.  Such a disregard for another’s privacy is the greatest invasion. No, switching blogs for a week is not a good idea.
Every writer has a unique voice that stands on all the writers that have gone before him. Every writer assimilates what he has read and studied  combines this education with his own character and emotional make-up and life experiences to create a new writing style that is all his own. Viva la difference.

Posted by Melanie Jean Juneau at 19:33 No comments: Links to this post

A Salute to the Royal Canadian Mounted Police on their 140th Anniversary, Four-year Old style 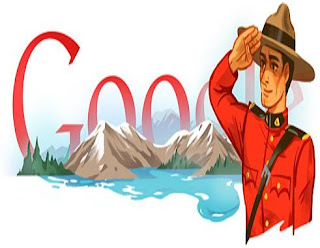 Today, May 23/2013 is 140th anniversary of the founding of the Royal Canadian Mounted Police.  Not only did my brother-in-law serve with the Mounted Police in the outposts of the Canada, a popular T.V. Show,  Due South, glorified the life the Mounted Police. The main character embodied courage, goodness, resolve and dedication, just the qualities to inspire one of my little boys for about 4-5 years of his life from two and a half till seven-years old.
This was not some passing fancy, no this was an out-right obsession with not one but three heroes, the Canadian Mounted Police,  Zorro and Batman. Daniel saluted all three with his self-styled uniform of a brown felt hat and black barn boots, a cape and a Batman sweatshirt. This costume was his daily attire for years. He had to wear it. not only that, he was in character for most of the day. Daniel rode our old horse like a combination of a Mountie and Zorro, and never merely walked but leaped and jumped as if he was soaring through the air, just like a super hero.
As our second youngest, Daniel was born with a zest for living. This was obvious with even a quick glance at his baby face. With his eyebrows raised in surprise, eyes wide open to see everything around him and lips smiling with glee,  Daniel was a delightful infant, toddler and young child. Actually his temperament at twenty has not changed much at all!
Daniel had a marvellous imagination, creating dramatic play scenarios like intense sword fightswith invisible villains.  He tried to imitate Batman’s ability to fly. I caught him just in time when he was three, as he slung a leg over the banister, so he could sweep down and save a hapless victim of crime. After that incident, I convinced him to jump off the fourth step of the front hall staircase. Honestly that little boy jumped countless times every day, black cape billowing behind him. One afternoon, a doctor passed us in a hospital and smiled at my son’s outfit,

Daniel took a flying leap, cape billowing behind him again and answered,

Another time, as we sat in a doctor’s waiting room, four-year old Danielbacked up and then crouched low like a runner’s preparing to sprint towards the plate-glass window. Shocked, I called out,

“Daniel, what are you doing?”

My four-year old son adjusted his tense stance and said,

“I am going to run and leap and smash that glass with my feet! Then I’ll fly through the air.”

However,Daniel did get a few chances to really fly when his older brother’s friends came out to the farm.  Matthew’s friends would play catch throwing this little guy instead of a ball. With his little legs tucked, arms clutched tightly around his bent legs, the strong teenagers would toss my son between each other!!
It was the teenage sleepover that provided Daniel with his most memorable flying feats. On early Saturday mornings, he would run from our big farm kitchen, down the hall and then launched himself into the air to land on all the teenage bodies strewn about the family room. A series of groans and moans joined Daniel’s gales of laughter as he yelled,

Posted by Melanie Jean Juneau at 11:38 No comments: Links to this post

I am so aware of flowers these days, even in the dark. Although I cannot see them, I can smell the perfume of my flowers flowing through open windows, chasing away the stale air of winter. It seems to me that we traditionally surround the grieving with  beauty in the form of flowers because they are living, sweet-smelling symbols of the beauty which surrounds their departed in heaven. Flowers soothe all of our senses and touch out inner spirits with a touch of heaven on earth.
Dating as far back as 1580 B.C., these flowers have long-held a role in ancient mythology.  White lilies symbolize chastity and virtue. Of course they are the symbol of the Virgin Mary’s purity and her role as  Queen of the Angels.  As the flowers most often associated with funerals, lilies  still symbolize that the soul of the departed has received restored innocence after death. No wonder we fill churches and our homes with lilies for Easter, as we celebrate Christs’ victory over death.
If we cannot speak,  flowers will speak for us. So, I offer this bouquet up for all those who grieve today in Oklahoma but also for all those who are grieving in obscurity, poverty, hidden from the notice of the world. Flowers tell the grieving that,
“In sorrow, we mourn those lost. In gratitude, we embrace those around us. In sympathy, we reach out to those who grieve.” -Unknown Author 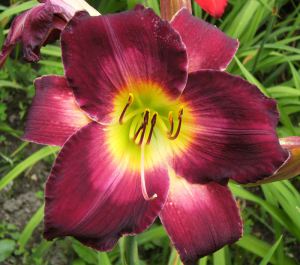 Posted by Melanie Jean Juneau at 12:32 No comments: Links to this post

Posted by Melanie Jean Juneau at 20:51 No comments: Links to this post 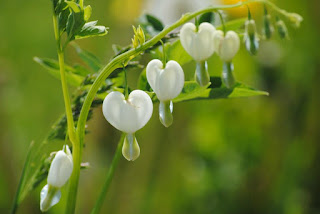 Have you noticed how people crave the outdoors? It doesn’t matter what the excuse, it can be anything from a simply walk, vigorous sports or lazy sun bathing, but people need to get out of buildings and connect with nature.
It has been an especially long, cold winter and spring in Canada this year. After one week of warmth, we endured another cold stretch. Today, though, is the beginning of the Victoria Day long weekend. Everyone seems to be excited; it is warming up once again. Cars jammed the highways last night, as people rushed to escape into the countryside, shop for bedding plants or open cottages.
Man was never meant to live surrounded by concrete. There is a vital rejuvenating energy in nature that restores and heals our emotions and our inner spirits.  It is a divine energy. God, who is  in all, is most accessible and visible in nature. Even if we can’t express this concept, some unconsious part of us pushes us out the door and into the arms of nature.
Mother’s day was cold last weekend, although my very grown-up kids  still followed tradition and came bearing hanging flower baskets and bedding plants, we ending up cutting and stacking wood and not digging in cold, wet soil like other years.  So with the rest of the country, I can’t wait to get outside and into my gardens. We are fortunate to live on seven acres, with a creek, meandering gardens, a field of clover and lots of trees, deciduous and pine.  Just by looking out our windows,  I can feel the power green as it  flows into my eyes and feeds my soul.

Posted by Melanie Jean Juneau at 01:50 No comments: Links to this post

We expect playful pranks from boys in their early teens because they delight in stretching the boundaries. Firecrackers offer many exciting possibilities to a creative thirteen year old.
My son, Joseph, along with a neighbour wondered what would happen if they lit a couple of fire crackers and threw them into the family’s country-style mailbox. The result was even funnier than they imagined as the metal door flew up and slammed shut again with a loud clang. Joseph and Riley doubled over with hoots of laughter.
Unfortunately for the boys, who should drive by at that exact moment?
The principal from the local public high school.
The boys noticed a car had stopped. They hopped on their bikes in a frenzy, rode down the long, curved, lane way to Riley’s house and lunged through the front door. However, that did not curtail this conscientious educator; he backed up his station waggon, followed the boys up to the house and rang the door bell. The principle’s stern lecture mortified Riley’s mum and embarrassed the boys. Joseph sheepishly recounted his adventure at the dinner table that night and we just shook our heads.
That incident was never repeated but firecrackers in the hands of one father led to sheer mayhem at our house a few years later.
We were barbecuing with a few other families. In the late afternoon, when the kids were getting restless and hungry, Pierre gathered the kids together, like he often did but this time he led them into the barnyard.
What did this fun-loving father do to amuse the throng of children who surrounded him?
Why he lit firecrackers and placed them in the middle of manure plops! We all heard the squeals and roars of approval from the kids. Before we knew what was happening, Pierre was paying the kids who dared to stand the closest to the smelly, disgusting explosions.We all shook our heads this time but smiled in spite of ourselves, wondering who was more mischievous, Pierre or the kids?
That was before we saw the kids close up. They were splattered with manure. Actually the foul-smelling gunk that covered them wasn’t even manure yet, it was fresh. The other mother’s and I were desperate to bathe our kids before dinner but we simply rinsed out their hair, gave quick sponge baths and I scrambled to find clothes to fit everyone. Rhonda, Pierre’s wife, fumed the loudest about stained clothing and Pierre looking sheepish, helped clean up his four small children.
I must admit that no one has forgotten The Day Cow Pies Exploded. My grown children still laugh in remembrance. I suppose that day is another example of the freedom, joy and muck that a farm makes available to all playful kids, both short and very tall.

Posted by Melanie Jean Juneau at 14:35 No comments: Links to this post

A Photo Post: Discovering Joy on a Farm with Nine Kids 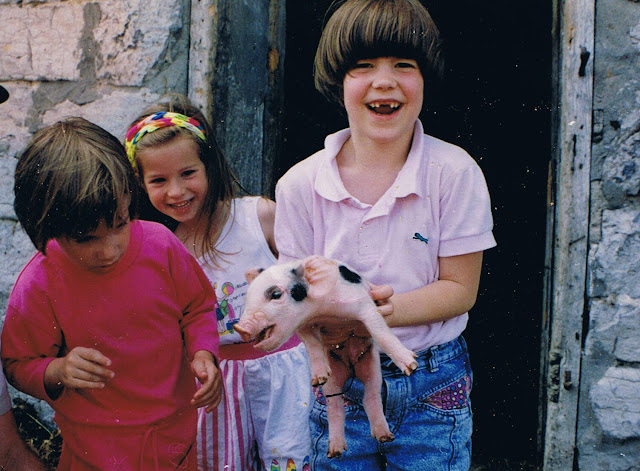 Posted by Melanie Jean Juneau at 19:58 No comments: Links to this post