Our second youngest, was born with a zest for living. This was obvious with even a quick glance at my baby’s face. With his eyebrows raised in surprise, eyes wide open to see everything around him and lips smiling with glee, Anthony was a delightful infant, toddler and young child. Actually his temperament at twenty has not changed much at all!

Anthony had a marvellous imagination, creating dramatic play scenarios like intense sword fights with invisible villains. By the time he was two and a half, he insisted on wearing one of two batman sweatshirts every morning. Anthony needed to wear his batman sweatshirt, so I just acquiesced and washed one of the sweatshirts every night. By four-years old he had added a black cape, felt fedora hat and black barn boots to his daily uniform. His outfit was my little guy’s salute to his three heroes- Batman, Zorro and the Canadian Mounted Police. 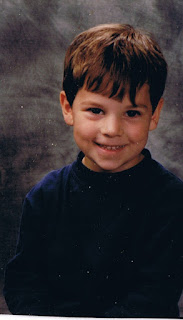 Anthony tried to imitate Batman’s ability to fly. I caught him just in time when he was three, as he slung a leg over the banister, so he could sweep down and save a hapless victim of crime. After that incident, I convinced him to jump off the fourth step of the front hall staircase. Honestly that little boy jumped countless times every day, black cape billowing behind him. One afternoon, a doctor passed us in a hospital and smiled at Anthony’s outfit,
“Oh my, what do we have here, Batman?”Anthony took a flying leap, cape billowing behind him again and answered,
“Oh no, I’m Batman Foevaaaa....”
Another time, as we sat in a doctor’s waiting room, four-year old Anthony backed up and then crouched low like a runner’s preparing to sprint towards the plate glass window. Shocked, I called out,
“ANTHONY, what are you doing?”
My four-year old son adjusted his tense stance and said,
“I am going to run and leap and smash that glass with my feet! Then I’ll fly through the air.”
However, Anthony did get a few chances to really fly when his older brother’s friends came out to the farm.  Matthew’s friends would play catch throwing Anthony instead of a ball. With his little legs tucked, arms clutched tightly around his bent legs, the strong teenagers would toss my son between each other!!
It was teenage sleepovers that provided Anthony with his most memorable flying feats. On early Saturday mornings, he would run from our big farm kitchen, down the hall and then launched himself into the air to land on all the teenage bodies strewn about the family room. A series of groans and moans joined Anthony’s gales of laughter as he yelled,
“Come on guys, it’s time to get up!”

Matthew’s friends still shake their heads and grin when they remember their flying alarm clock.

Fashion Sense? She was BORN with it

Tiny, adorable, clever and independent Emily was also strong-willed, high maintenance and high strung.  My fifth child, Emily was a beautiful little package of contradictions who gave me strife and hilarious joy, sometimes at the very same time.  Most arguments were about clothes. Although her fashion sense has developed into a wonderful gift now that she is in her mid twenties, at three and four-years old this “gift” was a pain.
Emily changed her clothes frequently throughout  the day, from the age of two. Watching one of the few videos of our family, one of my older daughters pointed at the screen and laughed,
“Look at Emily. That is the third time she has changed clothes during this video!”
Sure enough, the pip squeak had another outfit on.
Emily was always aware of what she was wearing as well as those around her, which often led to disagreements about what she could and could not wear. Although she was a mature, articulate, fashion conscious three-year old, I was still concerned that Emily was too young to start four-year old kindergarten. When she stomped into the house after the first morning, ranting about a little girl who had worn a “jean skirt with a MATCHING jean jacket”, I realized that it was the school which was not quite ready for EMILY
.
Alas, Emily’s attention soon turned to her busy mother.  I sometimes pulled on stockings, brushed my hair and applied a touch of make-up once I had climbed into our huge 13 seat mini-bus.  I barely had enough time to make sure my dress was clean and my teeth were brushed before I hustled everyone out the door. This changed when my daughters were in their late teens because they organized an all out assault to bring me into the 21st century. They took me to a hair salon for a cut and dye make-over, plucked my eyebrows, bought me clothes and make-up and forced me to throw out decade old comfy clothes. Emily has been the most persistent fashion advisor, however.
One evening as I tried to rush out of the house, Emily looked up from her homework and asked,
“Are you going out?”
I answered in the affirmative.
Emily continued, “And you’re wearing THAT?”
I nodded slowly.  I knew the direction that this conversation was headed.
“I don’t think so”, she added, “Remember the navy pants that Melissa bought you for Christmas and the top that Rachel gave you on Mother’s Day? That would look really sharp with my light blue scarf and my little black belt. Could you PLEASE try it on?”
I sighed and trudged back upstairs because it was easier just to comply. I must admit that she was right. Of course, once I came down, Emily had to jump up to adjust the belt and re-tie the scarf but as a result of listening to my daughter’s fashion advice, she was pleased and Michael, my husband, was pleasantly surprised.
Really though, Emily is an expert at changing outfits. She has been practicing since she was two-years old.