When I witness a so called
temper tantrum, I immediately think ,"That poor child" rather than, "That poor parent"

If I had to divulge one secret, which I was fortunate enough to discover early in my 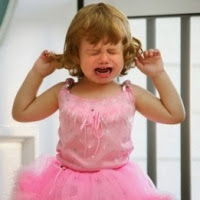 There is a universal image stuck in our brains of a screaming toddler throwing a tantrum on the floor of a grocery store as disapproving strangers shake their heads over the behaviour of spoiled brats. Even the best parent becomes a helpless victim in such a situation because nobody is as miserable and disagreeable as a hungry, exhausted, overwrought baby, toddler, or small child.
This so called temper tantrum is really a baby style, nervous breakdown; the little person, who is mostly  preverbal, is simply so over-stimulated, under nourished, physically exhausted and lacks the most basic coping skills to help them vent their frustration. Think what it would be like to be in a position of total submission, unable to meet any of your own needs yet the person in charge is ignoring you. Most adults would become furious in short order. So why are we surprised when toddlers lose control in a similar situation?
When I ignored the warning signs that my kids were reaching their limits of endurance, I created either a clingy, whiny shadow or a screaming monster.Then nothing I did or said seemed to help the situation.
I might have looked like a self-sacrificing mother but I was merely acting out of a sense of self-preservation when I put my kid's needs before my own. No time for resentment or pity parties because happy and satisfied kids were worth every "sacrifice" I made. The peace was worth any compromise or self-denial. Well rested, nourished kids are happier and more content, easily amused, entertained and distracted from prohibited behaviour.
One niece once told me that many people had given her books worth of advice when she became a new mother but the only thing she always remembered and practiced was,
"Never let them get tired and never let them get hungry."
It works. It really does. In fact it is like a magic key which seems to elude many seemingly intelligent adults. Perhaps they have never put themselves in their kids shoe's.

Posted by Melanie Jean Juneau at 23:07 No comments: